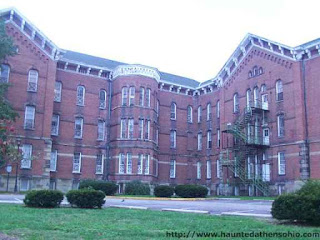 Once a calm and peaceful place for the criminally and mentally insane, The Ridges (originally named The Athens Lunatic Asylum) now stands in the shadow of its dark and haunted past. The Ridges opened its doors on January 9, 1874 after six years of construction. The Kirkbride design made the facility feel like home, instead of a cold and careless institution, and was more therapeutic for the patients. The calmer patients were able to paint, dance and go on picnics. They could go to church or plays and had access to the grounds. Some took care of the orchards and farm, and some trained at the nearby nursing hospital. This homey feel made The Ridges so popular that people began dropping off their elderly relatives when they couldn’t afford to care for them anymore or their rebellious teens when they no longer felt like dealing with them. The population at The Ridges spiked but the number of staff remained the same. This overcrowding became the downfall of the idyllic haven The Ridges once was. Painting, dancing and picnics turned into water treatment, shock therapy and lobotomies. 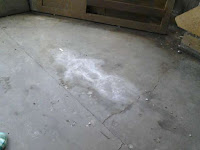 After the downfall of The Ridges, strange things began to happen. On December 1, 1978 a patient named Margaret Schilling disappeared. It is said that she was playing hide and seek with a nurse who got distracted and forgot to look for her. Margaret’s body was found over a month later on January 12, 1979. More curious than Margaret’s disappearance is the shadow she left behind. An imprint of her clothes and hair is perfectly visible on the concrete floor. No plausible explanation can be given – some say that her body decomposed and the outlined formed because of a reaction between her body and the sunlight. 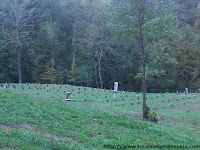 There are either two or three cemeteries at The Ridges, depending on who you ask. The most well-known is the one located at the rear corner of the grounds. It is the only part of The Ridges still owned by the state Department of Mental Health (the rest of The Ridges is owned by Ohio University and has been converted into classrooms and offices).  One of the unique features of this cemetery is that most of the gravestones are engraved with numbers instead of names and dates. Due to hospital records keeping track of which names belong to which numbers, some of the gravestones have had metallic veteran’s plaques added. (The identities of males #1 – #63 will remain a secret forever since their records are missing). Approximately two thousand people are buried at The Ridges Cemetery, including a large number of Civil War veterans.
Taking into account the horrible conditions that patients had to endure, it’s not surprising that  the cemetery is rumored to be haunted. Most of the stories are focused on a weird circle of graves. Legend has it that witches used this circle for seances. Ohio Universities official statement is that it was formed by pranksters some years back. Another odd placement of graves is over a wooden bridge across a little creek. Three or four graves rest there, isolated from the rest. In addition to the circle of graves, ghosts are also rumored to haunt the cemetery. Some have also reported seeing strange lights and hearing screams at night.
Sources: hauntedathensohio.com/the-ridges-mental-health-institution/; hauntedathensohio.com/the-ridges-cemetery/;
www.forgottenoh.com/Ridges/ridgeshaunts.html; www.forgottenoh.com/Ridges/ridgescemetery.html
Tweet