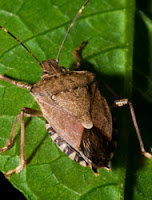 If you live in a drafty old house, you’re probably seeing them everywhere right now, now that sunlight is brighter, stronger and warmer.
Try these methods – which have been used successfully by homeowners and entomologists – to keep stink bugs at bay:
When stink bugs appear indoors, your options vary based on how many bugs you’re facing. What can you do?

HORSE FLIES – Horse flies are a summer nuisance for both your livestock and your pool. They are one of the most ferocious breed of flies. Unlike a common house fly, horse flies have cutting and tearing type mouth parts and they bite to draw blood. They are attracted to water because they lay eggs near water sources. Here are some ways to keep your livestock safe and keep them away from your pool. 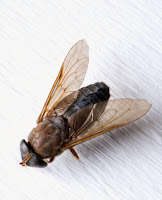 Horse Fly Prevention Methods:  Step 1 – Remove any trash or food sources from a swimming pool area. Flies are drawn to garbage for food, so cover any trash cans and keep them as far away from the pool as possible. Step 2 – Purchase a commercial fly light trap at a garden or home improvement store. This will attract the flies to the light, and then destroy them when they touch the device. Step 3 – Hang sticky fly strips around the pool’s area, high enough so that that people won’t walk into them. Change them often.
Homemade Fly Trap: Step 1 – Mix 2 cups of water, ½-cup of sugar and ½-cup of vinegar together to make fly bait, according to instructions found on Show Horse Promotions website. Step 2 – Cut an empty soda bottle in half and turn the top upside down. Place in the base of the soda bottle. Step 3 – Pour a few tablespoons of fly bait into the trap. Step 4 – Punch four holes on the sides of the trap with an ice pick and loop string on the holes so that the trap can hang from a wall or fence. Step 5 – Hang several traps around the pool area and discard them when they are full of dead flies.
Tweet