St. Patrick’s Day occurs annually on March 17 in observance of the death of St. Patrick. What began as a religious feast day in the 17th century has evolved into a variety of festivals across the globe celebrating Irish culture with parades, special foods, music, dancing, and a whole lot of green!
Saint Patrick, who lived during the fifth century, is the patron saint and national apostle of Ireland. Born in Roman Britain, he was kidnapped and brought to Ireland as a slave at the age of 16. He later escaped, but returned to Ireland and was credited with bringing Christianity to its people. In the centuries following Patrick’s death (believed to have been on March 17, 461), the mythology surrounding his life became ever more ingrained in the Irish culture: Perhaps the most well-known legend is that he explained the Holy Trinity (Father, Son and Holy Spirit) using the three leaves of a native Irish clover, the shamrock.
The first parade held to honor St. Patrick’s Day took place not in Ireland but in the United States. On March 17, 1762, Irish soldiers serving in the English military marched through   New York City. Today, there are roughly 2 million spectators who come out to celebrate in NYC, as well as many more all across America. 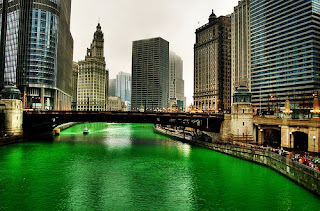